Multi-Tasking In Framlingham And Kent

It's been quiet on this blog for the past week as we've been keeping ourselves very busy and time has been in short supply. We've been doing a bit of voluntary work in Framlingham helping some elderly people with form filling and shopping. The shopping is easy but the form filling can be extremely complicated. We've got to the stage where we could almost call ourselves experts in Powers Of Attorney, Attendance Allowance and various other bureaucratic paperwork. Powers Of Attorney are brilliant things and really help the partners of  those with dementia - ( A word of advice; make sure you sign one as early as possible as you never know when memory loss can turn into something much worse and by that time it may be too late to sign). We've done ours so we can relax knowing that if we lose our marbles our kids can take over managing our affairs for us. Form filling is fine but the human story behind each form is often difficult to handle and not every decision goes the way that you would like it to.

Last weekend we drove down to Kent to look after our granddaughter Catherine while her mum and dad and baby brother went to a wedding in Lancashire. We had a great weekend babysitting and the time simply flew by. 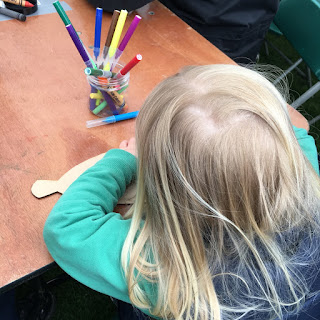 On Saturday we took her to the English Festival near Chatham. The Riverside park was filled with stalls, and there was live entertainment and, of course, a funfair. Catherine had a wonderful afternoon and I was even roped into going down the helter skelter with her. 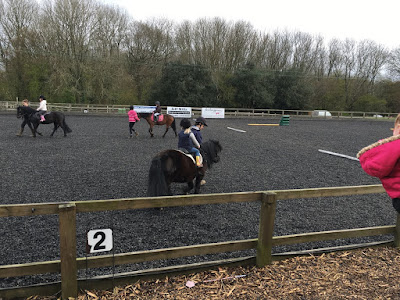 On Sunday she had a horse riding lesson. She was given her favourite horse (Jacket Potato) to ride and she loved her half hour of trotting quickly and slowly around the paddock. 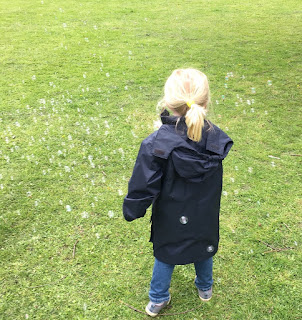 We bought her a bubble gun at the English Festival and she had hours of fun with it (well, minutes really as the bubble solution doesn't last too long at the rate she was using it). We took her to school on Monday morning and then had a day in Rochester before driving back to Suffolk when the family got home.

Although she's only three Catherine is extremely grown up. When we told her that she couldn't do two things at the same time, she disagreed. "I'm multi-tasking" she said.

When Marion had her 60th birthday last year, we and a group of friends (four couples in total) got together and celebrated at The Inn At Whitewell. We got along so well that we suggested that we should make such reunions a regular event and six of us were able to meet up again in November in Yorkshire. Last weekend saw our third gathering and I am delighted that all eight of us were able to make it this time as we rented a big house in Matlock in the Peak District.

We got there on Friday night and enjoyed a good meal (I would say that as Marion and I cooked it) with plenty of fresh Suffolk produce from Leo's Deli, Hall Farm Butchers and other local stores. Our friends Mark and Nita, whose son runs the fabulous and multi award winning Whalley Wine Shop, took charge of the wines for the weekend and supplied us with an excellent range to complement the meal. With such good wine and conversation it was well into the early hours when we got to bed.

With unpredictable weather forecast for Saturday we played safe and went to nearby Chatsworth House where we could keep ourselves occupied rain or shine.

After a good day at Chatsworth we returned to the rented house before enjoying a good meal at a cheap and cheerful local Italian in Matlock called Viva. The service was friendly and the food tasty.

Mark also sent some of his photos of the weekend.

It was a great weekend and we're now planning the next.

Posted by John Brassey at 20:36 No comments:

The New Novel Is Off To The Editor

My second novel is now complete at 82,700 words and it's gone to a professional editor to be knocked into publishable (hopefully) shape. I really enjoyed writing this book and I've been very pleased with the feedback to date.

I asked for volunteer readers on this blog and on Facebook and Twitter and was delighted when a fair number of people responded and offered to give it a try. Their responses have been trickling in over the last four weeks and they've provided me with some helpful and constructive criticism and some very encouraging comments.

I appreciate that I have not made any comment on the blog or on Facebook about the content of the book. This is deliberate. The subject matter is quite topical and I want it to be as fresh and original as possible when it comes to its launch.

It's a comedy and for me the most important thing is that everyone who responded has said that they laughed (some even admitted to doing so out loud). The other pleasing thing is that  three readers reported staying up late well beyond their normal bedtime to finish the book as they wanted to discover what happened. This means that my two principal aims - to write something funny and to create a page turner were met (at least with my volunteer readers). This has been particularly encouraging as they have not all been people who I would consider my target audience.

As a result of some of the critical comments I've made some very minor changes. I also spotted another half a dozen typing errors in my final draft. It's always easy to get carried away when you create something. No friend or relative is going to want to tell you that your painting is rubbish, your poetry stinks or your novel is dire and that's why I asked for volunteers. Of course some of those readers have been friends and relatives but there are several others who I have never met and their feedback has been very much on the same lines as the rest.

So what next? The editor is a highly respected figure in the publishing world and he will not pull any punches when he gets back to me. I'm paying him for his expertise and not his sycophancy so my current upbeat feeling about the novel may be taken down a few notches when he gets to work but until then I'll bask in the warmth of the response.

Thanks again to those who have read the book for me. I'll make sure that your help is acknowledged if it goes into print.

Now it's time to start on the next one. 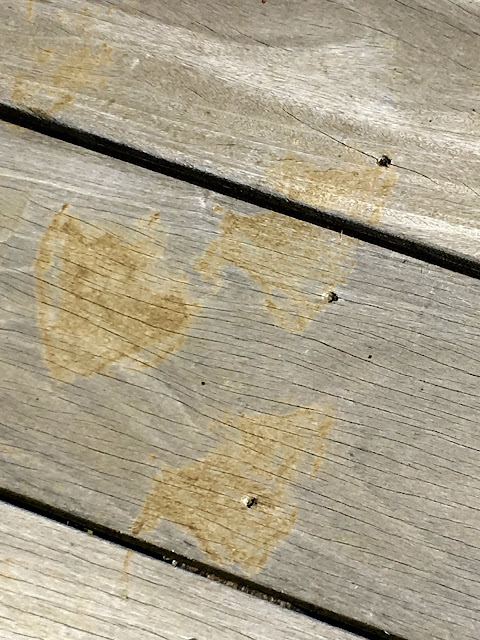 Before we left for Scotland we cleaned the garden decking of muddy prints left by some of the local wildlife but when we got back at the weekend there were plenty more. It didn't exactly take Sherlock Holmes to deduct who was the culprit as we followed the mucky trail into the garden borders......... 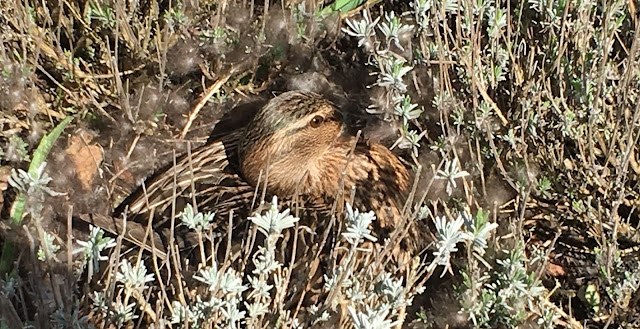 ......where we discovered whodunnit. Not content with leaving us more cleaning she's built herself a nest in the middle of a lavender and is incubating a clutch of eggs. We hope that, once she's hatched them, she'll lead her ducklings to a more suitable home. Until then we're going to have to try and keep the mess down to a minimum. 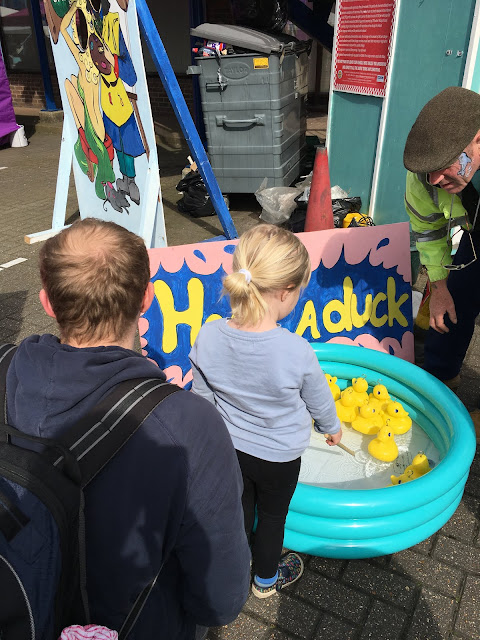 Things would have been far simpler if they were this type of duck which Kent granddaughter Catherine enjoyed hooking when we visited her and her dad and little brother at the weekend. We went out to an enjoyable event in Chatham where we were entertained by a variety of musicians and sideshows. 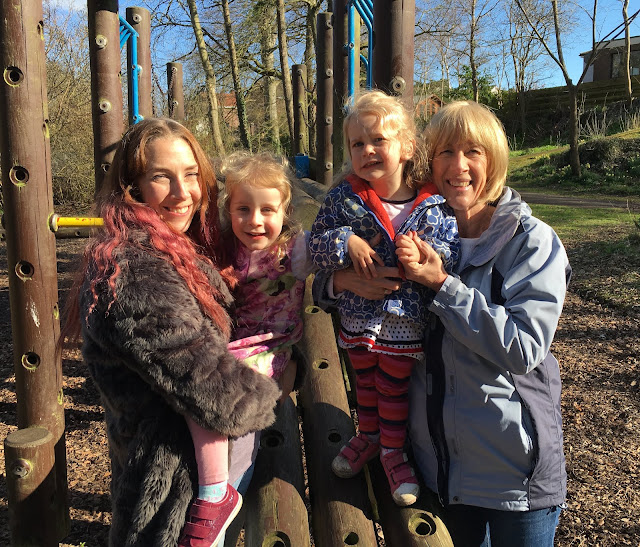 It was sad, as always to leave our Scottish family but we had a great time seeing Rose and Melody who are growing up so quickly. 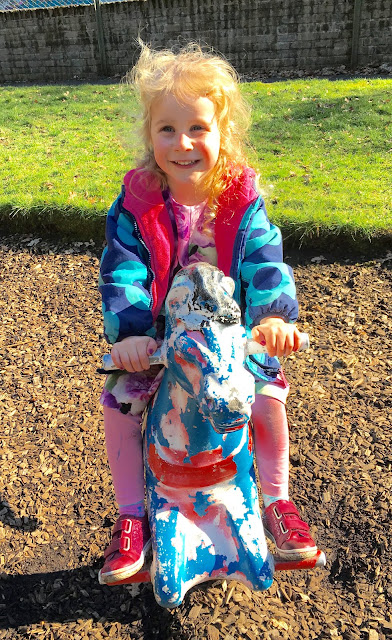 It won't be long before Rose starts school. She and her mum and sister are coming to visit us in Framlingham soon. We can't wait to welcome them. Let's hope the weather's kind as there is plenty on over the Bank Holiday weekend.

It was certainly kind in St Andrews where we enjoyed some pleasant sunshine while Marion was recovering. I'm so pleased to report that she's better now. She's done a couple of classes at the gym and returned to the yoga class where her illness first showed itself six weeks ago.

Next time we're back in Fife we'll have to go back to The Seafood Restaurant. It's in such a magnificent position with the best views in St Andrews on a fine day. 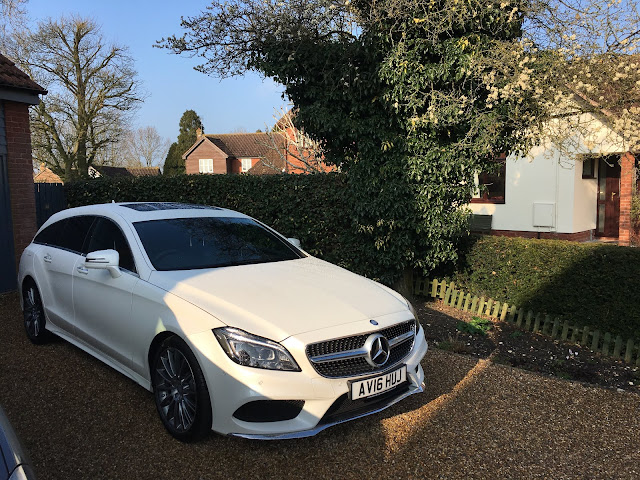 The new car has arrived. It's the same model as the old one but in white instead of silver. They've done some tweaks to the shape and style and I really love the new look. It's also very comfortable which, in view of the pretty substantial mileage we do every year, is the main reason for buying it . 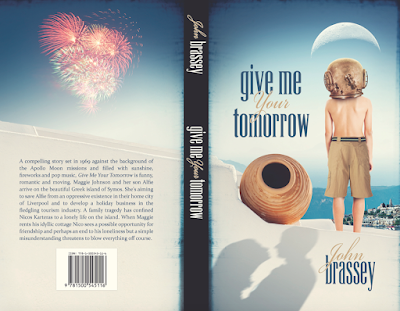 While we were away I put my first novel on free offer with Kindle for five days. The promotion saw it hit number three in the Amazon charts in the holidays category. I hope that all those who downloaded it enjoy it. I also hope that the people who volunteered to read my second novel have enjoyed it. Some of the comments I have received have included "Brilliant", "I couldn't put it down" and "I laughed loads" which is encouraging. I've also had some very constructive criticism. It's booked in to be professionally edited next week so I need feedback soon to make my volunteers' time  worth their while as the editor has given me a specific time slot. If you have a copy and can't give me feedback in time please let me know so that I can crack on with final revisions.

Posted by John Brassey at 18:10 No comments: