Election Over - Life Returns To Normal 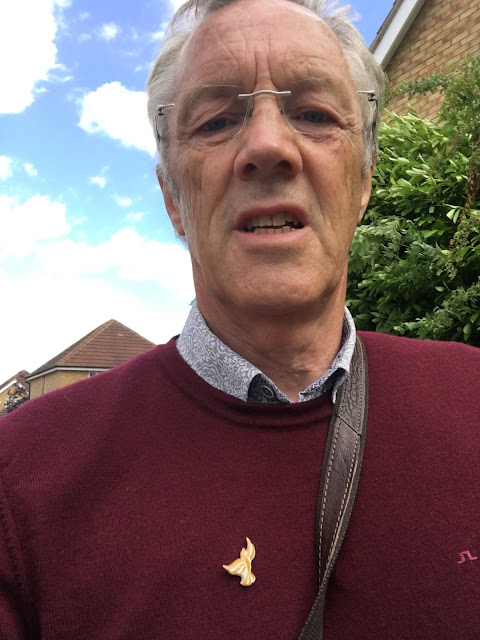 I posted over a thousand leaflets in total and walked over twenty miles. Sadly to no avail as our candidate did not win in either seat although I was happy to see Mrs May lose her majority. 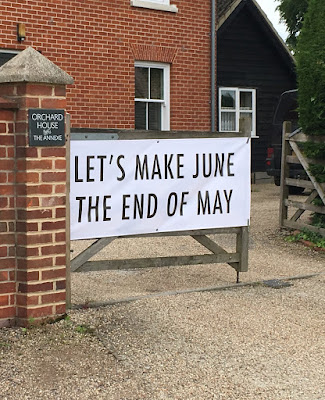 Living in a Tory stronghold, I was pleased that I was not alone and I was pretty impressed by the effort put in by some residents of Earl Soham. After staying up until four in the morning watching the election results it was time for a bit of a lie in on Friday but life returned to normal at the weekend and we decided to have a day trip. 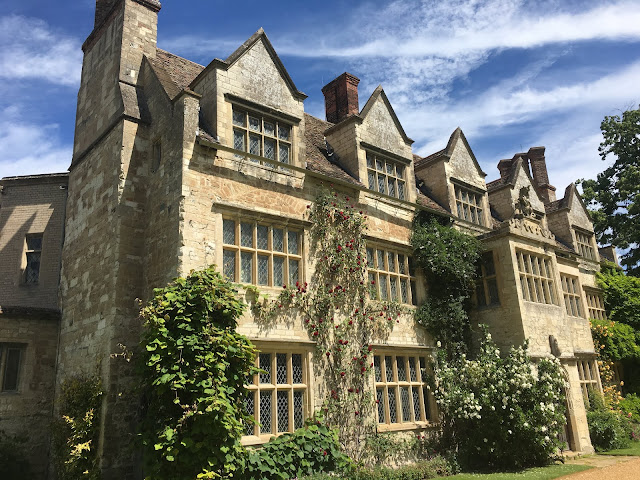 On my drives to Lid Dem HQ in Cambridge I had spotted a National Trust sign for Anglesey Abbey. We'd never heard of it before so we headed back towards Cambridge on Sunday to check it out. It's a stunning house with a fabulous collection of antiques. 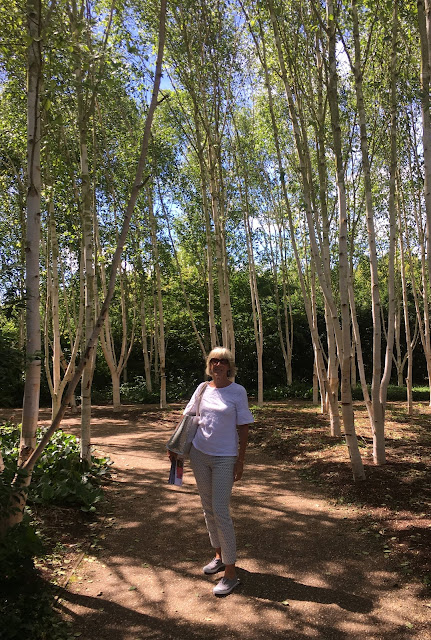 There are loads of delightful walks around the gardens.

Thursday evening saw us heading up to the college for our regular book club. 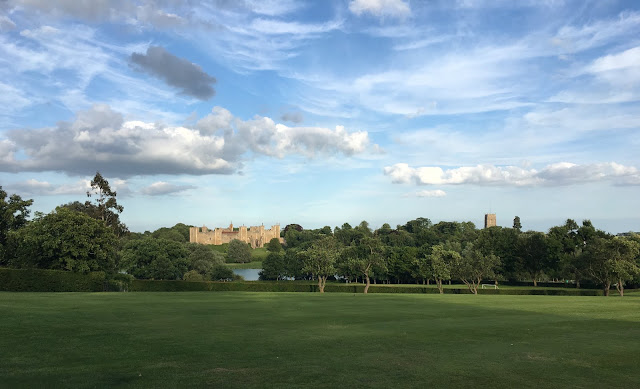 Every time I see this view from the college drive I have to take a photo. I doubt that there's a better view in Suffolk.

Friday saw us in London to restock the wardrobe. Or rather my wardrobe this time. Marion prefers to buy little and fairly often whereas I do a splurge once or twice a year. We had tickets for the National Theatre on Saturday so stayed at a Premier Inn near Tower Bridge on Friday night.

We enjoyed a great meal at Cantina Del Ponte on Friday night. As we were in the middle of a heatwave it was wonderful to dine outside with a brilliant view of the bridge and the lively riverside. 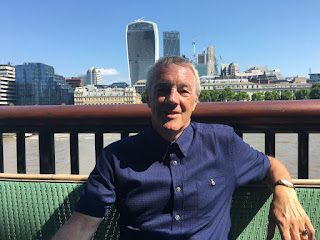 It was back to the riverside again on Saturday for breakfast opposite the City and then we walked down to the National. 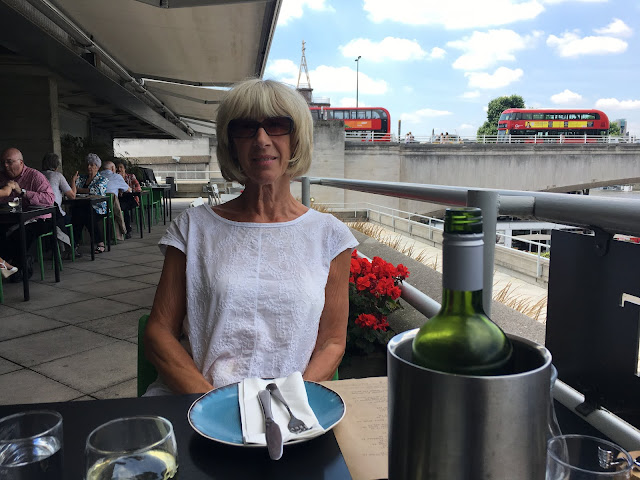 Where, once again, the boiling weather allowed us to dine on the terrace. 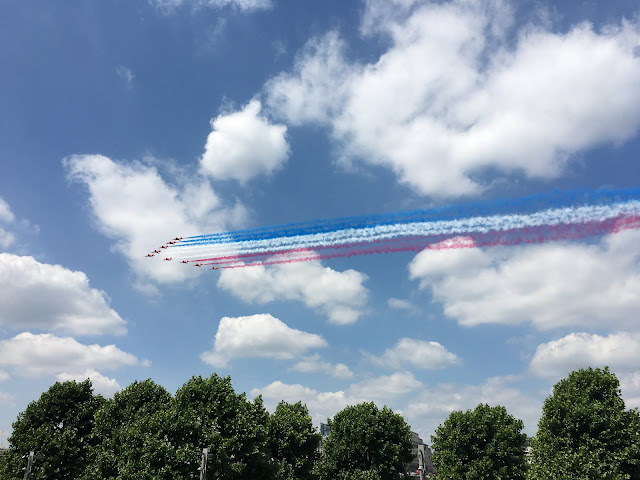 They even put on a fly past for us.

As for the play, Common starring Anne-Marie Duff? Well, we had been warned by the plethora of one and two star reviews and, for once, the National auditorium was very sparsely attended with gaps all around. The play was visually exciting but totally weird and even fewer saw the second half than saw the first. It was a bit Wicker Man with odd animal masks and the language - more F and C words than an afternoon on the Kop - was quite bizarre. I can't say that I enjoyed it but I'm glad that I saw it. 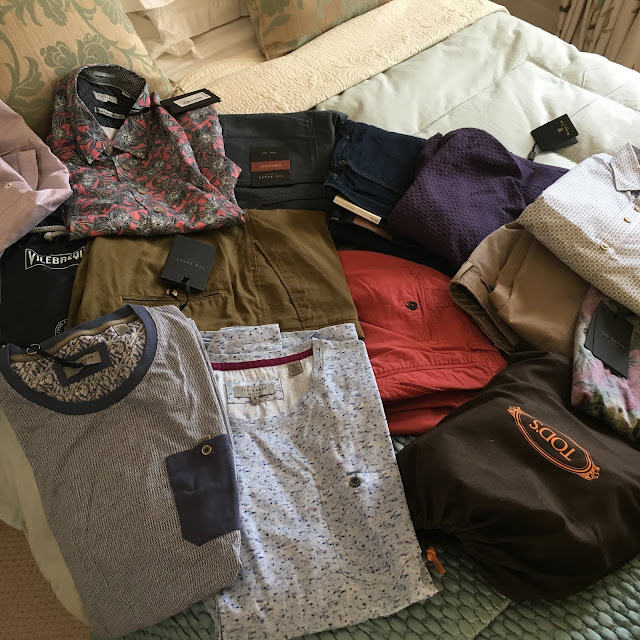 The shopping trip went well and my summer wardrobe is very well stocked. It will need to be if the heat of the last few days continues - our car's temperature gauge has hit thirty degrees. 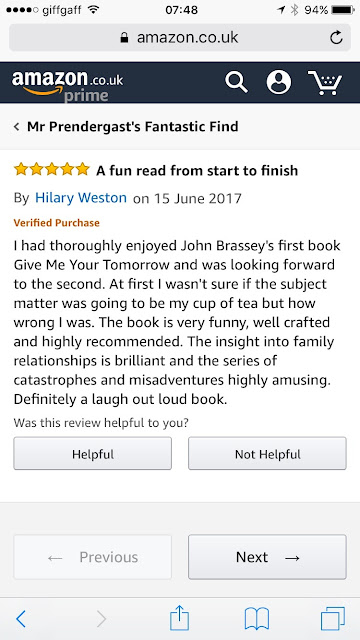 Back home on Sunday we had some guests round for a late lunch. 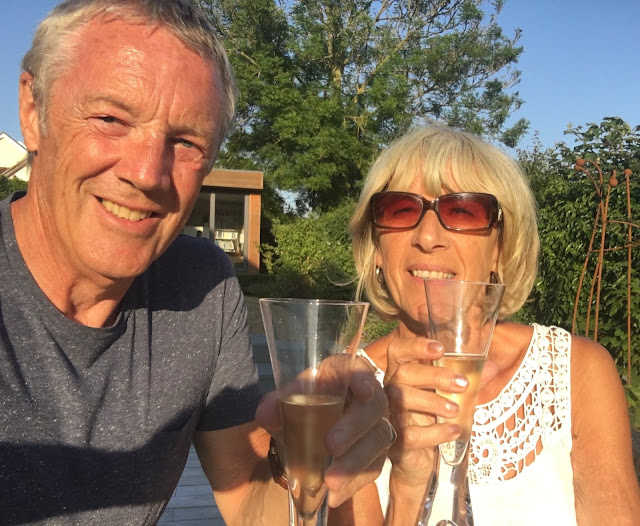 On the Costa Del Fram.
Posted by John Brassey at 21:57 No comments:

So what happened? I've been writing this blog religiously for five years now with no more than a week between postings when all goes quiet for over two weeks.

Well, actually, something did happen. 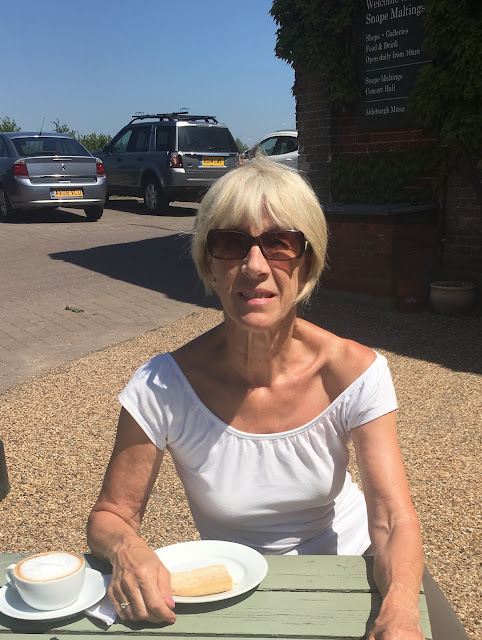 The weather was glorious two weeks ago so we decided to dust down our bikes from the garage and go for our first cycle ride of any length this year. We packed our stuff and rode off into the beautiful countryside and enjoyed a stop for coffee at Snape Maltings before going on to one of our favourite atmospheric locations - Iken Church. 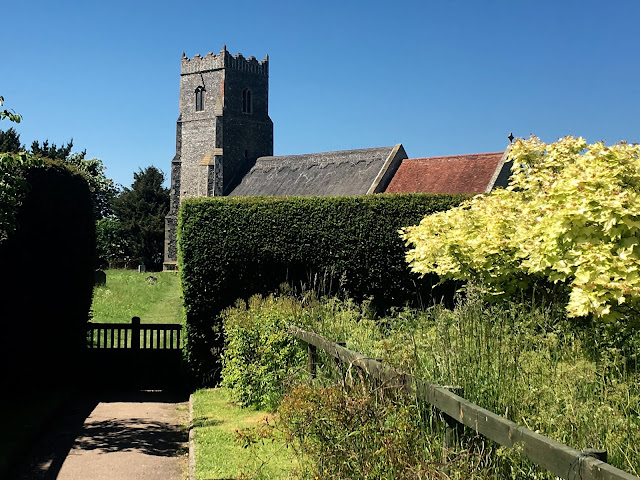 After a while exploring the churchyard it was time to get back on the bikes and head for home. We decided to ride a shorter distance than usual as it was our first time out for a while and we were making good time when Marion hit a pothole while coming down a hill. She ended up on the dusty track with a horrendous deep graze to her knee and another to her elbow. It was a nasty accident and it happened in the middle of nowhere. We had no option but to walk to the nearest habitation and twenty minutes later rolled up at the Glemham Crown.

The pub was shut but after wandering around the outside front and back shouting "hello", I was finally spotted and the people in the pub came to our aid. They were brilliant and patched Marion up before storing our bikes away and driving us home. I took Marion to the local surgery where she was expertly bandaged up and our friend Richard from In Da Cottage Antiques went in his van to collect the bikes. It was good to have such willing and kind "Good Samaritans". The incident showed us that even the gentlest of bike rides can be lethal. Phone reception is quite poor in the country lanes and, if we had been alone and incapacitated, it could have been quite a long time before anybody passed by.

I'm delighted to say that Marion is recovering from her nasty experience but she hasn't been able to do much since and it's probably going to be a while before she gets back in the saddle. 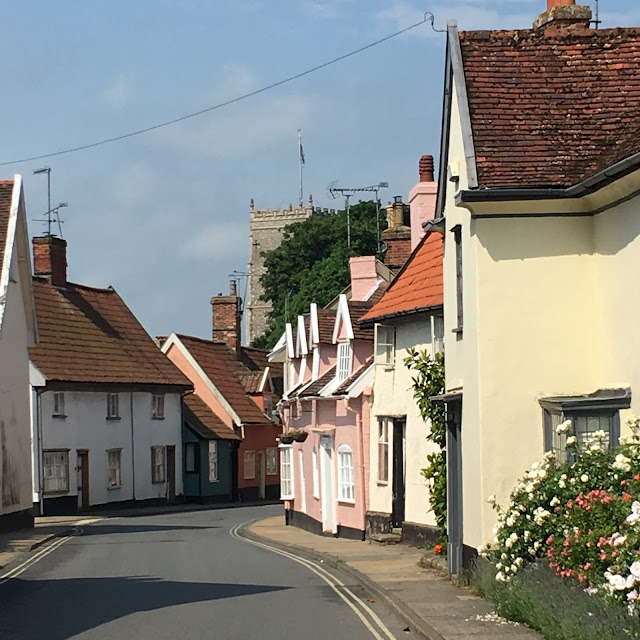 The fine weather was with us for a while and Framlingham looked good in the bright sunshine that marked the day of the Gala. 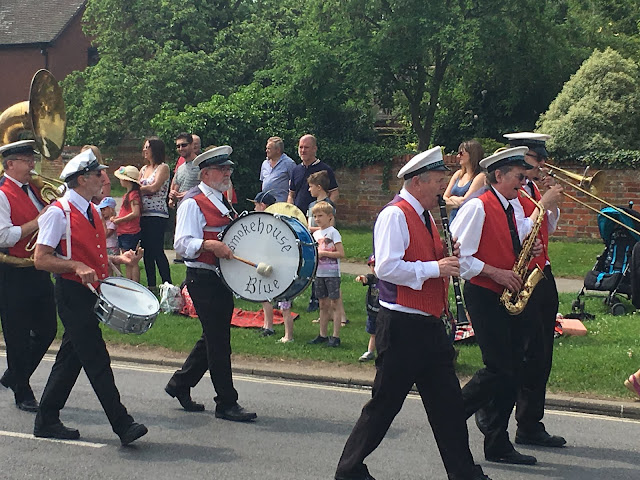 No amount of sunshine could make up for the dismal Gala procession. We went early to The Railway and got prime seats outside the pub to watch the floats go past.Lots of families gathered on the grass verge opposite. This band came past. 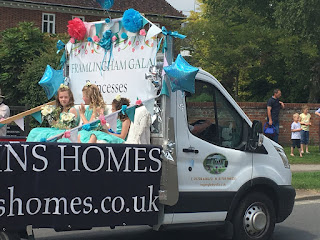 It was followed by the Gala Princess just behind. And after the princess came a few kids and parents dressed as characters from musicals and then? Cars - lots of cars - and that was it. In previous years, the procession has taken a while to cover the route up to the Gala field but this was the most feeble parade imaginable and I feel sorry for those who took the time to turn up (both as spectators and participants). I don't know anything about the Gala organisers and don't want to level unfair criticism but something clearly went wrong and I hope that it does not mark the end of this enjoyable annual family event. 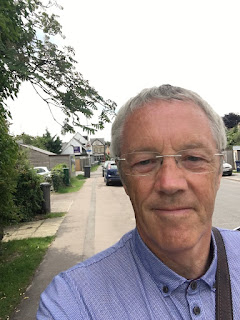 While Marion has been recuperating I've been doing a bit of electioneering for the Lib Dems whose policies and manifesto are the closest to my beliefs. Here I am out in Cambridge where the Lib Dem candidate lost at the last election by under six hundred votes. I went out in Framlingham too today but ended up with a pile of soggy leaflets as the heavens opened. I'll be off to Cambridge again tomorrow for a final push before the big day.

With Marion incapacitated I decided to have a few hours in the fields with the detector. With all the fields in crop, the only land available locally is a strip of uncultivated land alongside the road. I call it "tin can alley" as it is within easy chucking distance of passing cars. 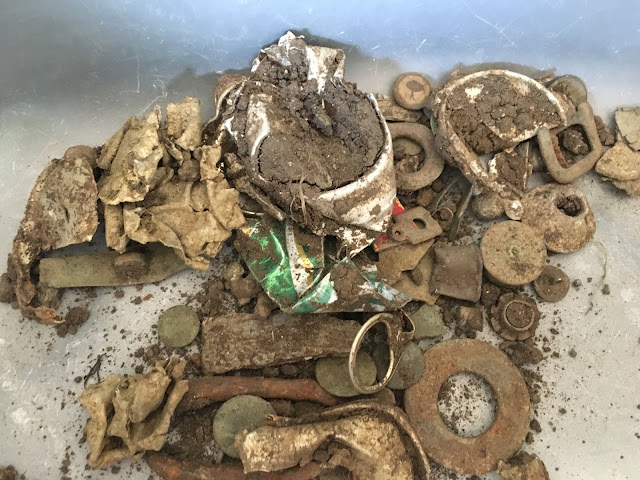 And boy do a lot of people throw cans into that field. The problem is that, although I am ninety percent sure that I am digging a can, cans do give positive signals that might turn out to be something a lot nicer. 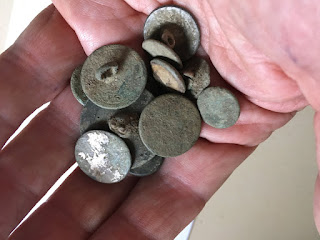 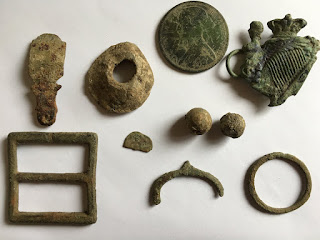 The usual array of buttons turned up. As well as an army cap badge, a couple of buckles, musket balls and other bits and bobs/ 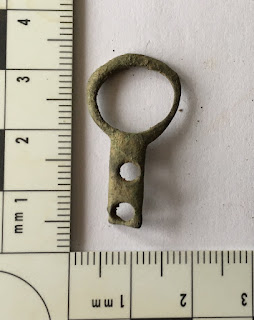 These are likely to be medieval. 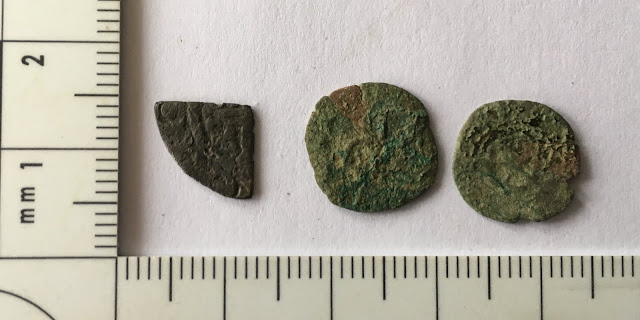 A medieval silver cut farthing and a couple of Charles I Rose Farthings. 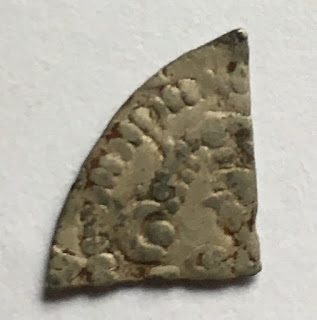 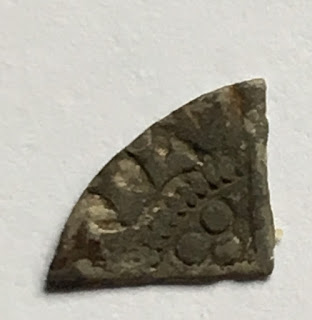 Plus another medieval silver farthing. Somebody identified this one for me as Henry III minted in London eight hundred years ago. It's quite amazing that this was nearer the surface than some of those cans and ring pulls.

I'm delighted with the response to the book. Sales are going okay and I've had some lovely reviews. Here is the latest. This is a genuine review, I do not know "Lauren" but I do know that she has great taste! I had some exciting news about the book this week - I'll tell you about it when I get more details.

Until then, I hope that I'll be back blogging regularly now and that Marion will be able to get back on her bike very soon.

Posted by John Brassey at 15:17 No comments: