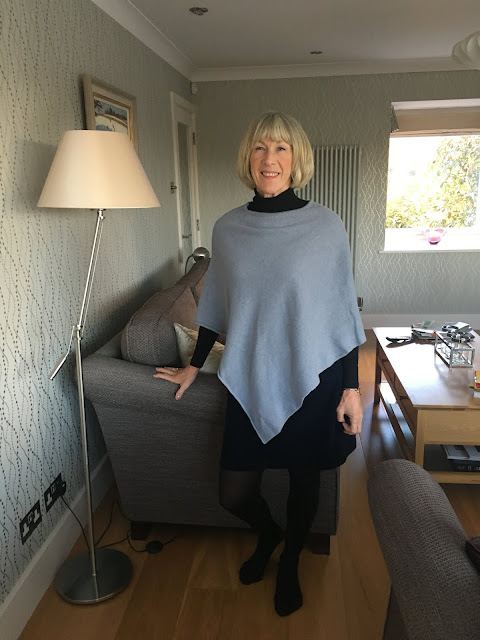 It was Marion's birthday this week. Here she is wearing her birthday present from some of the family. She's looking as great as always and I think she's a very glamorous sixty-something.

We were in full grandparenting mode last weekend. The Rochester family's house is undergoing improvements and there aren't many cooking facilities at the moment so we volunteered to look after Catherine and Teddy for a couple of weekends. We didn't want them to have to be stuck in the car for the drive back to Framlingham (which can be a nightmare on Friday evenings) so we decided to take them an hour's drive into Kent.

We chose an AirBnb for the first time and ended up in a very nice little stable conversion near Margate. We had planned lots of activities for the children but the snow and sub-zero temperatures put paid to that and we had to change plans. 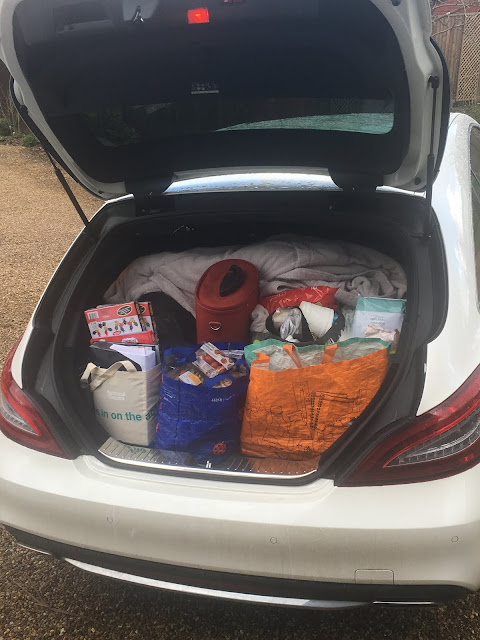 It's amazing how much you need to pack for a two night self catering break with a two and a five year old. 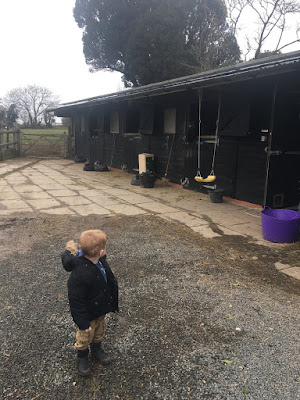 When we arrived the weather was not too bad and the kids had a great time meeting the horses in the adjoining stables. But Saturday morning saw a layer of snow covering the ground and our planned trip to a nearby nature reserve was abandoned (good thing as we later found out that they closed it.)

Instead we drove the short journey into Margate. We don't know Margate but managed to find something to keep Catherine and Teddy occupied. 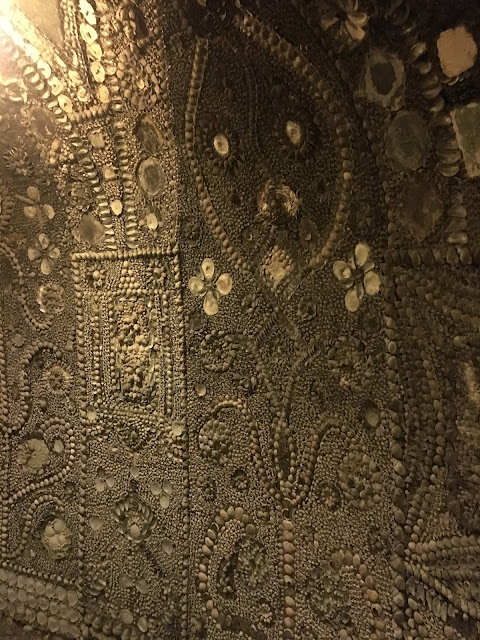 The mysterious Shell Grotto was discovered beneath a suburban garden in the 1830s but nobody knows how old it is. It's certainly an interesting place and the children loved the subterranean tunnel and chamber.

Sunday's weather was also freezing and snowy so it was back to Margate. This time we went to the magnificent Turner Contemporary art gallery which sits imposingly on a headland at the end of the Margate seafront. The sea was spectacular. 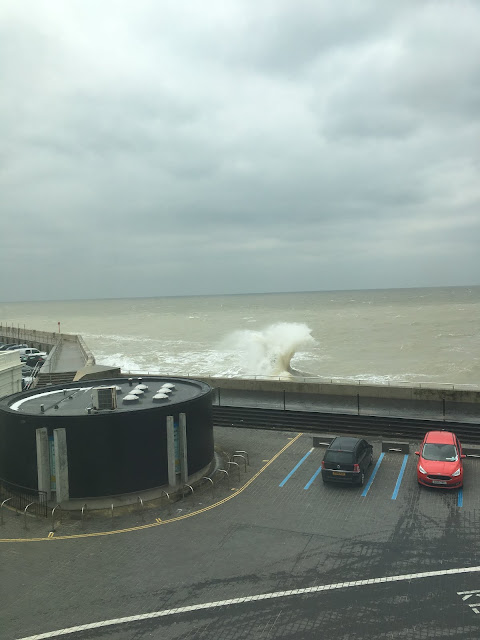 We had to dodge the waves to get out of the car. 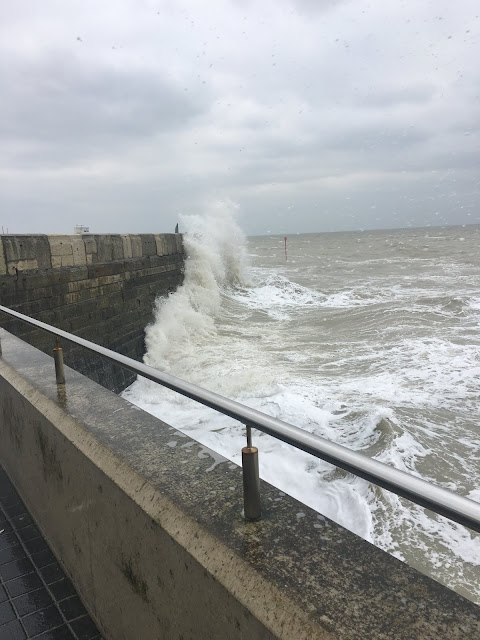 I then foolishly decided to photograph the waves and managed to get myself completely drenched when this one continued on it's way and reached the spot where I was standing. Nice picture though. 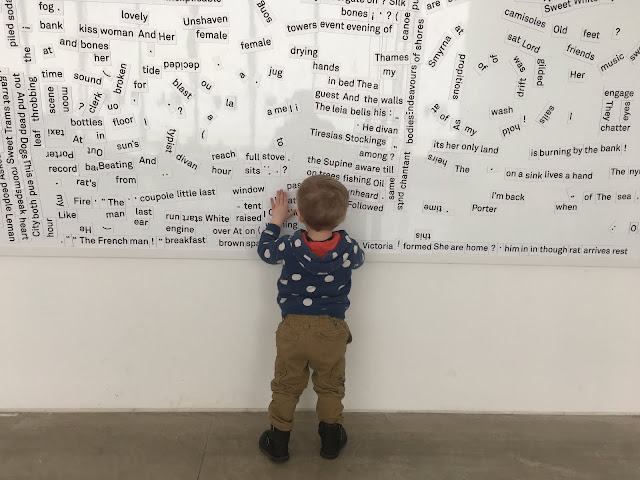 The gallery was a big hit with the children. 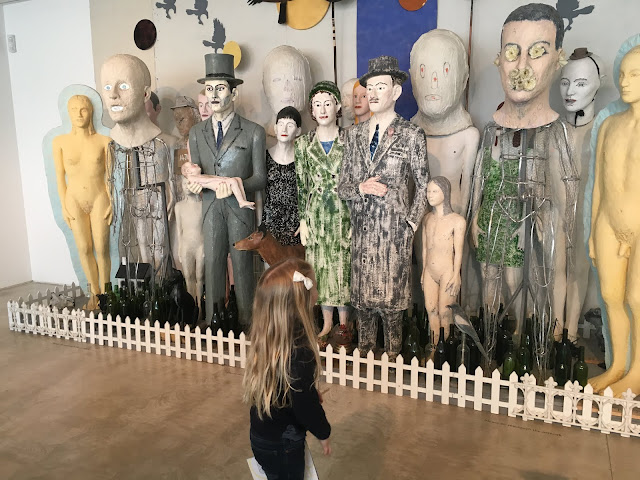 The snow continued on the journey back to Rochester but died off en route back to Framlingham so we avoided another night camped out at the Orwell Crossing Lorry Park.

With the weather being so cold and miserable we've managed to take in quite a few movie trips and have been to five films in the last two weeks. 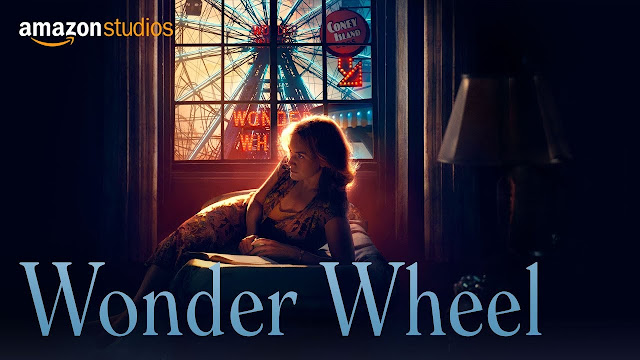 Woody Allen's Wonder Wheel has fabulous sets and beautiful cinematography in warm colours. Kate Winslet puts in a fine performance as a downtrodden wife whose life is lifted by the attentions of a young and handsome lifeguard and is then brought crashing down when her beautiful young stepdaughter arrives to stay. It's not the best film ever but certainly worth seeing for Winslet's performance alone. 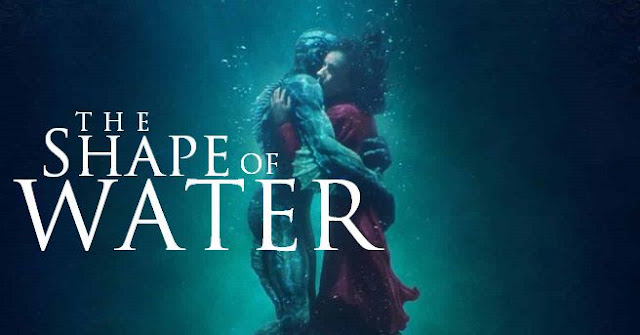 The Oscars implied that The Shape Of Water WAS the best film of 2017 but, after starting with the most fantastic ethereal underwater dream scene it dissolved into a weak love story between a mute young woman and a sea creature. I can't see what all the fuss is about for this one. 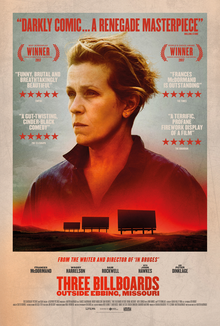 On the other hand, Three Billboards Outside Ebbing Missouri, which lost out to The Shape Of Water, is a fabulous film. We both absolutely loved this blackest of black comedies and Frances McDormand fully deserves her Best Actress Oscar. It's a mystery how the film didn't win best film. 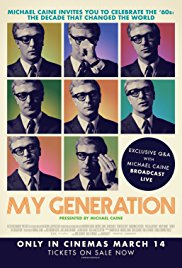 Having grown up in the 60s, Michael Caine's My Generation was a must see. The clips and the soundtrack are absolutely fabulous and, although I'm not a big fan of Michael Caine who narrates, it's worth seeing for those alone. 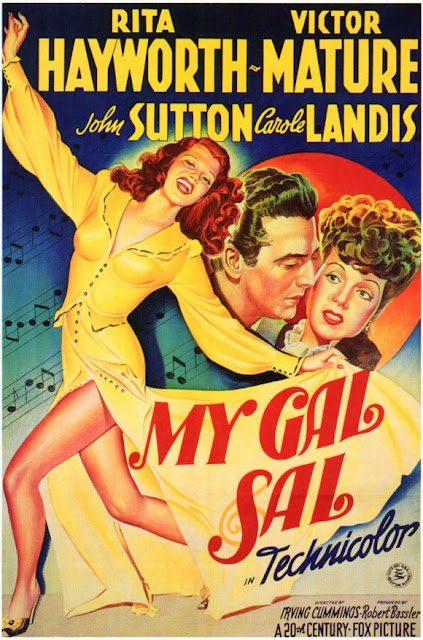 As Marion loves cinema, I wanted to take her to see something on her birthday. The only problem was that I could't find a film that we hadn't seen or we wanted to see. So I opted for something a bit different and, after a great meal at The Lighthouse in Aldeburgh, we walked down the road to the cinema to see My Gal Sal starring Rita Hayworth and Victor Mature. Well it was certainly a bit different, and the meal was delicious.

I'll end with my latest detecting finds. Before yesterday I had had three detecting sessions in 2018 but they were very short due to the wet conditions leaving the detector and my boots covered in mud but it was fourth time lucky yesterday when the weather was dry (if still bitterly cold) and the field was light soil instead of a quagmire. Here are the finds from those sessions.

Posted by John Brassey at 14:45 No comments:

The Curse Of The Scottish Play

The curse of Macbeth is only supposed to apply in the theatre and to those who are involved in its production but the latest offering from The National Theatre certainly seemed to put a jinx on us. We booked tickets for Tuesday's preview as we couldn't make later dates and, as the show was an evening performance, we decided to take in an exhibition in London as well. 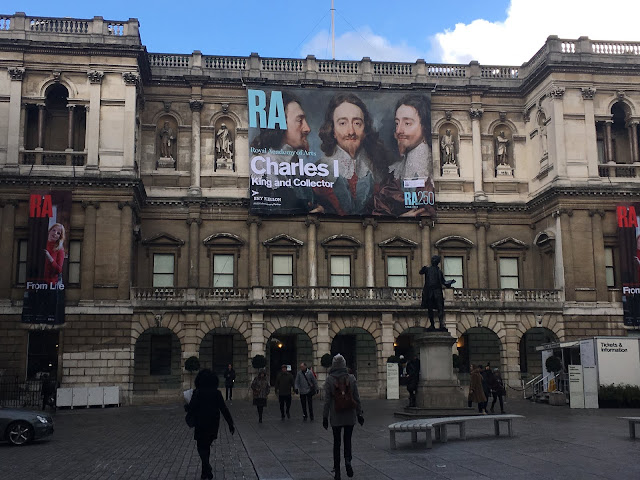 We drove to Stratford in good weather conditions and got the tube to Green Park to go to Charles I "King and Collector at the Royal Academy. It is a fabulous exhibition crammed with magnificent art works collected by Charles including several Titians and many Van Dycks. It took almost ninety minutes to view the exhibition and we could have spent longer but had booked a meal at The Terrace in the National Theatre. We walked from the RA to the south bank and, although there was a bit of ice underfoot, it wasn't too bad.

We were eagerly anticipating Macbeth. With Anne-Marie Duff and Rory Kinnear topping the cast it promised to be an unforgettable night. 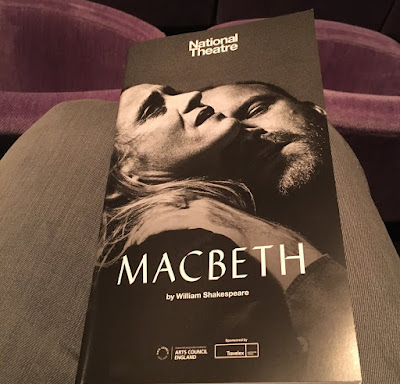 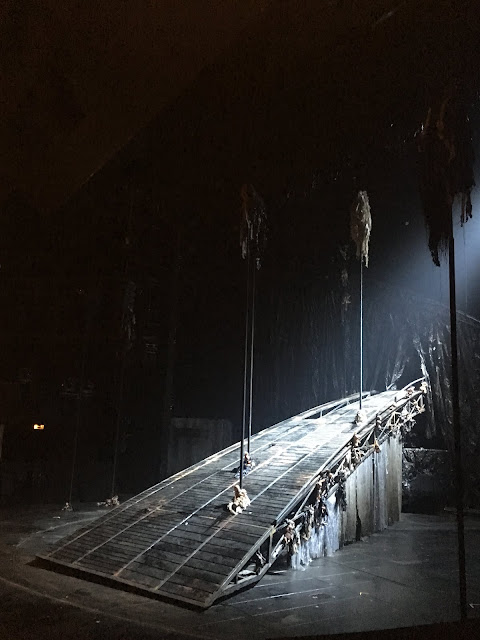 It's not etiquette to review a play during the previews but do look out for the reviews - I expect them to be very interesting indeed. Perhaps the ski slope like set should have warned us of what lay ahead for the journey home.

We can't say that we were not forewarned. The news has been filled with nothing but the Beast From The East"  for the past week so we packed the car with blankets, food, an overnight bag and a shovel. We texted a neighbour before we left to enquire of conditions (not bad he said) and we checked all the travel news and weather sites. Likely snow between our setting out at 11p.m and arrival home at 1a.m? 33%. I gamble a bit so I reckoned that a 33% chance of snow meant a 66% chance of no snow and we'd take those odds.

And as we reached the outskirts of Ipswich at 12.30 a.m I was pleased with the gamble. The journey had been perfect. Virtually nobody else was on the road and everything was hunky dory. Only half an hour to Framlingham and a warm bed.

Although I said I gamble, I should have added that I'm not  a very good gambler and, as we moved onto the A14 and approached the Orwell Bridge, it started to snow. Within seconds we were in a blizzard. The clear dual carriageway disappeared in minutes and we were suddenly driving blind with no visible road markings, no traffic and a terrible sense of doom. We had passed the first turn off after the bridge and had to drive on. Just ahead we saw the signs to the Orwell Crossing Lorry park. For the first time in my life a truck stop looked appealing. 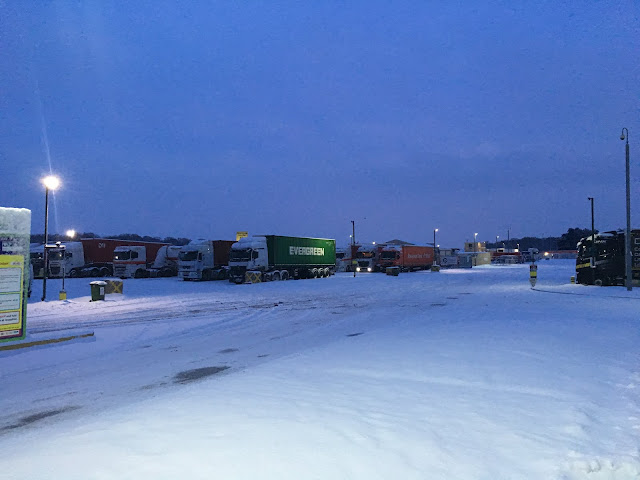 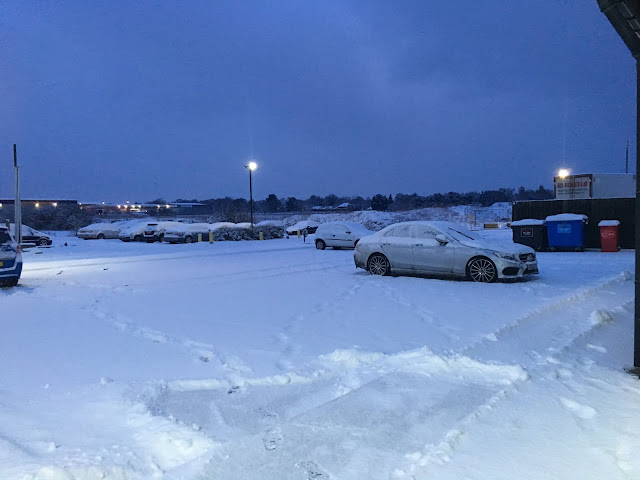 We parked up, took our blankets and went into the closed cafe and asked the security guard for shelter. He kindly pointed us to a couple of leather sofas and we settled down for the night. We didn't get much sleep (the comings and goings of the lorry drivers visiting the showers and toilets took care of that) but we were rested and safe and are now experts in the stacking system at Felixstowe, know that you can't cancel your load without a password and that there's a real camaraderie amongst truckers whatever their nationality.

We reckoned that there was enough traffic moving at seven for us to try and get home. The A14 and A12 were passable but, when we left the A12, the route to Framlingham was a nightmare with just one tyre track to follow. We managed at about ten miles an hour until we reached the garden centre when the car couldn't get up the small hill. With about fifteen cars and lorries stuck behind us we eventually had some volunteers to push us over the rise and arrived back in Framlingham at around 8. There was no way that we were going to get up the hill on Fore St so we drove into the car park at the bottom, abandoned the car and walked home.

I suppose I was stupid to make the journey but we had a great day out in London, saw another play that everyone will be talking about and an adventure to boot. We were well prepared but lucky that the blizzard came at the time it did or I suspect we'd have had a very severe talking to from the traffic police. 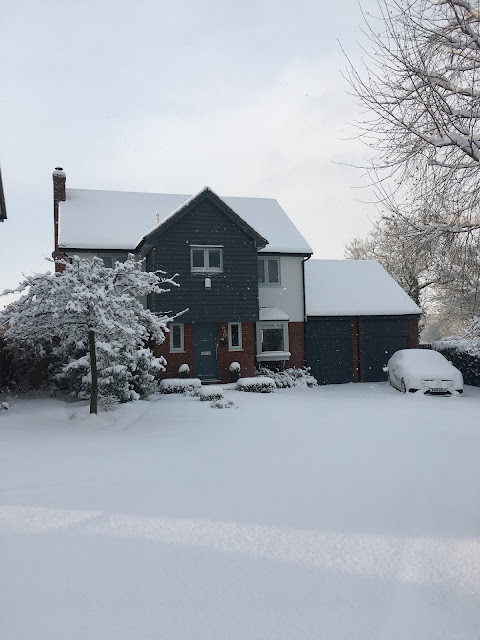 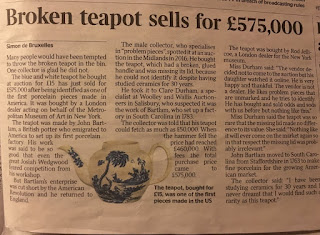 In other news, I saw this in the paper this week. If you like stories like this, you should enjoy my novel Mr Prendergast's Fantastic Find. (Links up there one the right of this blog)

Before the "Beast" hit us, we had a bracing walk along the beach at Aldeburgh at the weekend. 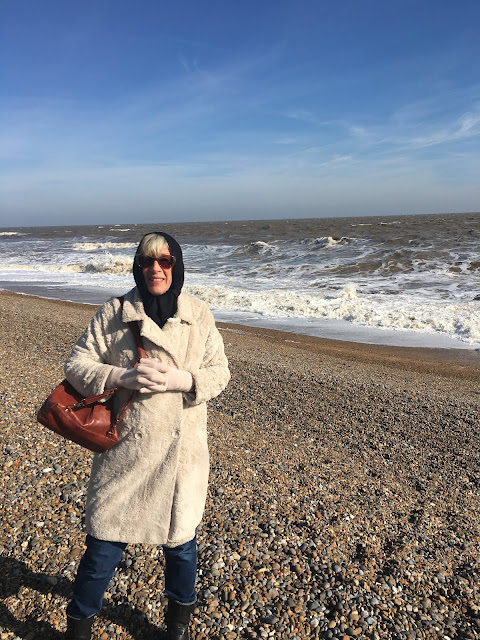 We haven't seen tides like this since we moved here. 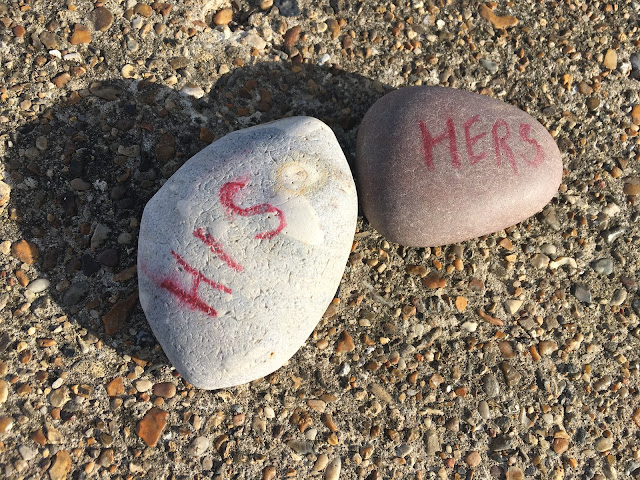 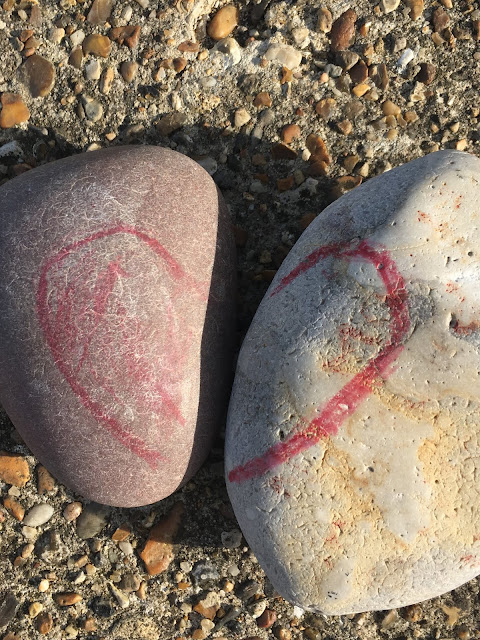 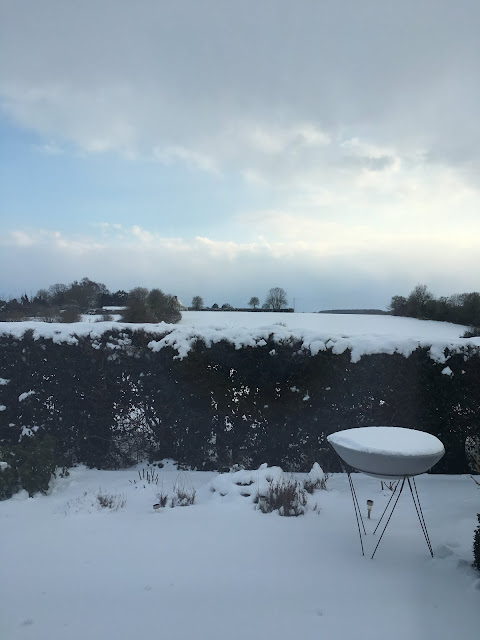 We were supposed to be driving to Scotland today and taking my mum for a week in the caravan. After Tuesday's escapade, we've decided to give it a miss.
Posted by John Brassey at 12:15 No comments: