Afternoons At The Movies

I've been embarrassed to call myself a movie fan recently. The weather since spring was so good that driving to Aldeburgh, Woodbridge or Ipswich to sit indoors for a couple of hours held little attraction and we missed a lot of good films when they were released. Now that the weather has turned, we can put that right and we've certainly done that with a vengeance this week.

Our first trip was to Cineworld to see Tom Ford's Nocturnal Animals.

This is a stylish film. Amy Adams is a gallery owner who lives in a shallow world of pretentious art. Her ex-husband sends her the manuscript of a novel that he has written and dedicated to her and she immerses herself in reading it. His story comes alive on screen and she and her ex play the lead characters in a horrific rape and murder story. As she finishes each section of the novel we return to the reality of her life and problems. Both stories are gripping in their own right and it is easy to forget that one is simply a fiction in which her ex (like many authors) has used his own life experiences to fill the page. Adams is brilliant in this role and I won't be surprised to see her figure in the Oscar nominations when they are announced. 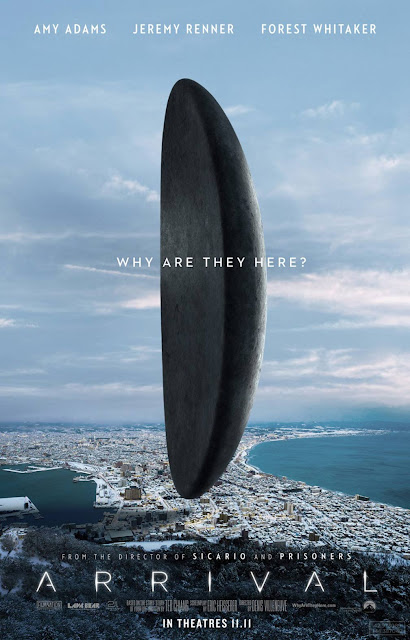 On Tuesday we were back in Cineworld and it was Amy Adams again. This time she starred in Arrival. When twelve alien craft arrive on earth simultaneously the world struggles to communicate with the strange octopus like creatures that become known as Heptapods. Amy Adams is a language professor whose task it is to try and learn the Heptapod language and communicate with the creatures before the world loses its patience and blasts them to kingdom come. It's a very clever story with a big twist that you may or may not pick up on. Although I saw the twist coming I never quite understood it and, two days later Marion and I are still not a hundred percent sure if we got it all right. It's a very thought provoking and clever Sci-Fi movie and a real cut above the flash bang wallop of Star Wars and similar. 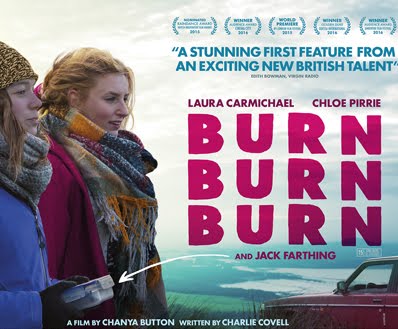 Yesterday was time for an independent and lesser known film. "Like Thelma and Louise with Casper The Friendly Ghost" is how Dan, one of the characters in Burn Burn Burn, describes the road trip that he asks his friends Alex and Seph to take. Sadly Dan is dead at the age of just 29. He didn't tell his friends that he was ill but instead made a series of short videos telling them four locations where he wanted his ashes to be scattered. The memory stick (Daniel's Dongle) containing the films is given to the girls at his funeral and they set off with Dan in a tupperware box to fulfil his final requests.

Although we've seen plenty of road trip movies it's a fascinatingly refreshing and different idea and there are plenty of smiles and more than a few tears as the young women come to terms with the home truths that Dan felt unable to express when he was alive but is happy to confront them with on his death.

We saw this at the excellent Ipswich Film Theatre a great supporter of independent movies. It's unlikely to get on widespread release but it's very well acted and certainly worth trying to track down.

While not at the cinema we've been busying ourselves with Christmas shopping. We've made good progress and have bought over half our gifts. I've not done any detecting but did go to see the archaeologists in Bury St Edmunds to leave my finds from the last few months for recording on the Portable Antiquities Scheme.

Anna, the Finds Liaison Officer, confirmed that this gilded silver piece is part of an Anglo Saxon mount and, as such is Treasure.

I did write a blog about recent events that have led me to becoming political - I joined a political party last week for the first time (Lib Dems if you ask)- but I didn't publish the blog as some of the stuff that has caused me to feel this way may have offended readers. However, I have to pass comment on one thing. 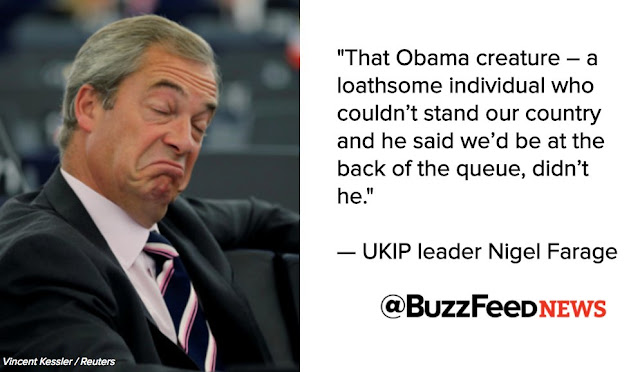 This man referred to Barack Obama as "that Obama creature" - "so what" said his UKIP acolytes "we're all creatures." Rest assured, we know exactly what Farage was saying. His words were chosen deliberately. People are talking about making him a Lord. (Lord definition - a man of noble rank) (Noble definition - having or showing fine personal qualities or high moral principles). Need I say more?

I am what the marketing people call an "early adopter" so, when I heard about the future of TV being Ultra High Definition, I immediately went out a bought a UHD ready set (just as I did with HD and 3D some years ago). I looked forward to watching a wide variety of films and TV shows with the sharpest images imaginable and, indeed, some of the Netflix and Amazon Prime offerings were amazing. The problem was that the UHD output was limited and there are only so many times that you can watch YouTube videos of The Grand Canyon and coral reefs.

It was with great excitement therefore that, eighteen months after buying the set, I read about the arrival of Sky Q. Finally there was going to be regular programming in UHD including football. So, once again, I ordered it straight away (before the current price cuts) and waited to be delighted by a new viewing experience. I waited...and I waited. Two months after forking out for the service and numerous emails, phone calls and internet chats with Sky operatives we finally got an installation date.

Was it worth it? 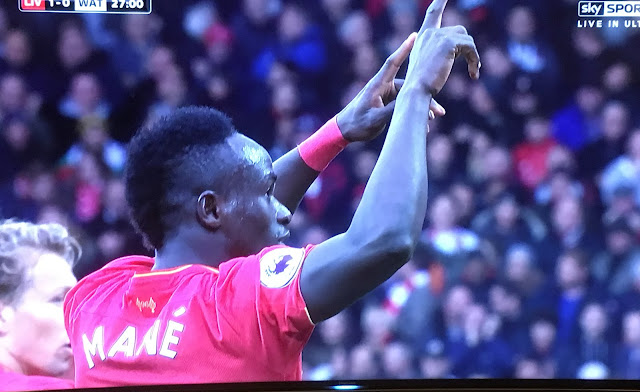 Here's a photo of the screen from the Liverpool Watford match on Sunday. The sharpness was amazing and it certainly is the highest picture quality football match I've seen. Touch wood, the Sky Q system is working well and I look forward to enjoying plenty of Ultra High Definition programming.

A consequence of getting Sky Q is that the ordinary Sky boxes are obsolete. Our son Paul works in TV and for some time we've recorded and saved shows that he developed and awards ceremonies in which his work featured. We realised that we would lose these recordings. It would be possible to copy them to DVD but, although we have recordable DVD players we never watch DVD and I wasn't confident that they would last.

I wracked my brains about how to save these numerous bits and pieces for posterity. We decided to forget about the series of programmes (after all, most are readily available somewhere on the internet) and opted for just the awards shows. As the latest iPhone has a 4K video camera Marion played the clips she wanted saving on TV and I filmed them. We're pretty satisfied with the results. I've uploaded this one in low resolution but the quality of the clips we've saved is very high.

A League Of Their Own

I've loved art and antiques for years and for around ten years from 1999 I spent hours on eBay buying and selling ceramics and other bits and pieces. When we downsized and moved to Framlingham, most of the collection had to go and I had to hang up my "boots" or whatever antique traders hang up when they stop dealing. However I still get the occasional itch to get back into it and when I saw a fabulous piece of pottery in friends Rob and Richard's In Da Cottage shop last week I couldn't resist the urge to buy it. 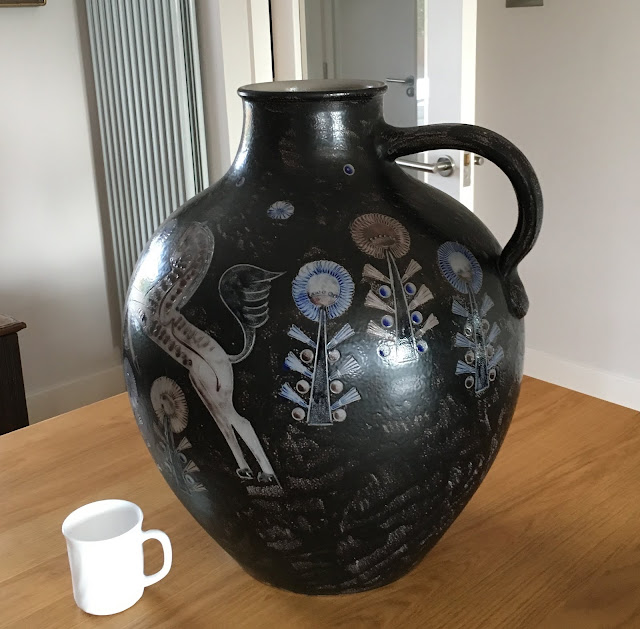 Yes that really is a full size coffee mug alongside it. 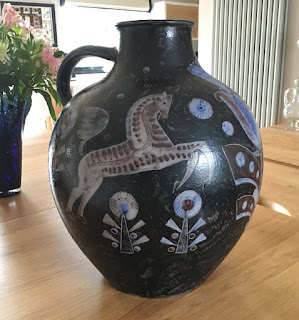 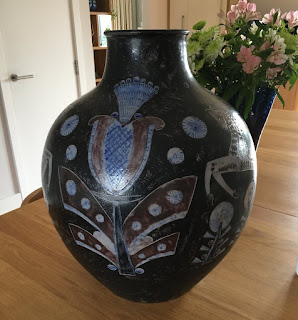 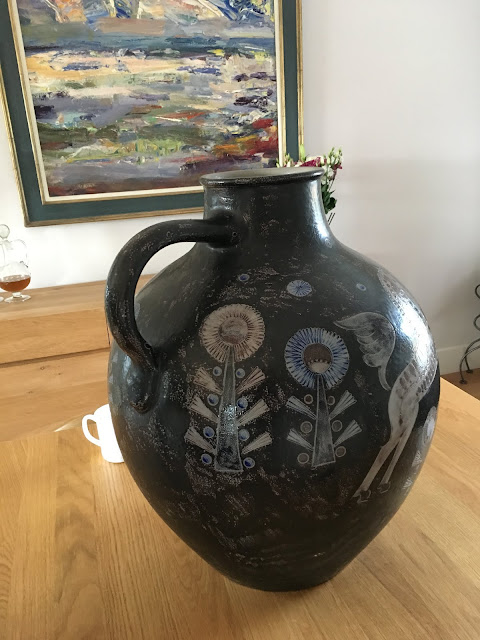 I've no idea where to put it and had no idea who made it when I bought it although, after hours of painstaking detective work I've discovered that it was made in Germany in the Westerwald region in around the middle of the last century by an art potter called Wim Muhlendyck. He's not a massive name but this is a gigantic piece and a real statement that would not look out of place in a museum.
Posted by John Brassey at 15:37 No comments: